NEXT ROUND OF THE CHALLENGE CUP

Sunday 4th December, Wycombe Town FC vist Royal Standard FC at Holmer Green, last seasons Premier division winners, in the next round of the Challenge Cup, which is probably the tie of the round! 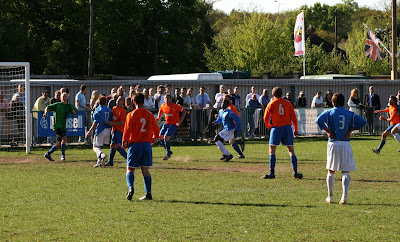 Away to Happy Union FC in the Premier Division, Wycombe Town secured their position at the top of the table with a strong 5-1, Town dominated the play with good passing football and made several chances throughout the game. The goal were sread evenly around the team with Delroy Howell, Andy Nicol, Rikki Gilbert, Alan McKie and John Mbamarah all getting on the score sheet. 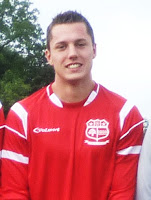 Rikki Gilbert on the score sheet
Wycombe Town Reserves entertaind Downley Albion at Holtspur knowing a win would elivate them to second in the table, playing a neat passing game they won 3-2 in an exciting game with James Hall, Liam Holder and Mike Morrissey all finding the net!

INTO THE LAST SIXTEEN!

Wycombe Town FC moved to the last sixteen of the Berks & Bucks Intermediate Cup with a strong performace over a good West Drayton Maurderaz team, winning 1-0 with a goal from captain Darren Crane. Although 'Town' dominated the game Maurderaz defended well and although they hit the wood work and came close on several occasions 'Town' could not add to the score. 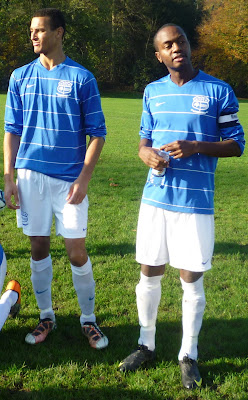 Alan McKie with Darren Crane
Town Reserves continued their climb up the division 2 table with a well deserved win away against Naphill Men FC with James Hall adding to his goal tally in this 1-0 win.
Posted by WTFC No comments:

Wycombe Town FC played FC Disraeli away at the Rye in the Premier division and came away with a 6-0 win to take them top of the division. Playing well below par for the first half an hour, 'Town' still went in at half time 2-0 up. The second half saw 'Town' find their rhyhm with slick passing and cutting through balls all backed up by a rock solid defence. Town's scorerers were Delroy Howell and Andy Boxer Nicol with 2 each and Rikki Gilbert and Micheal Butcher with 1 each. 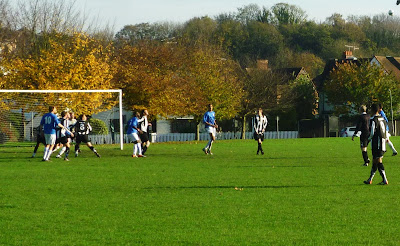 'Town' attack the Disraeli goal!
Wycombe Town Reserves played out a good and even game at Holtspur against Saunters Wood United drawing 1-1, with another goal from James Hall.
Posted by WTFC No comments:

Wycombe Town FC are away to FC Disraeli on the Rye in a Premier division game and the Reserves entertain Saunters Wood United at our Holtspur home in a division two match.
Posted by WTFC No comments:

Wycombe Town Reserves came away with a point against Red Lion Rangers with a 2-2 draw but should have claimed all three points, James Hall added 2 more goals to his seasons tally, the team is gelling well and the are now half way up the table so its all to go for! 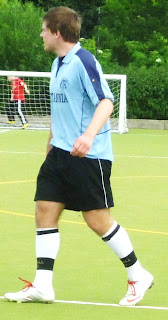 Wycombe Town first team visited Italia Unita at Magnolia Drive and were looking forward to a good game but were dissapointed when Italia could only field 7 players, Town were 7-0 in twenty minutes before an Italia player was injured and limped off and the game was abandonded.
Posted by WTFC No comments: