Wycombe Town FC 2 v Pioneer FC 1 This Sunday, Wycombe Town FC deservedily beat Pioneer FC 2-1 to take their place in the Chesham Charity Cup Final to be held on Tuesday 8th at Chesham FC's ground. With a driving wind against them, 'Town' nearly took the lead in the first five minutes when Delroy Howell hit the post with a rasping shot but then they had to defend against the strong wind relying on counter attacks to finish the half 0-0. In the second half with the wind now behind them, 'Town' dominated the play and where rewarded when Chris Paget fired in a powerful free kick which left the keeper stranded to go 1-0 up. 'Town' then went a man down and Pioneer struck back to make it 1-1, with time running out Vinny Cuva broke into the box and managed to squeze the ball into the net to deservedily fire 'Town' into the final.

Wycombe Town FC will now play their Chesham Charity Cup Semi-Final, against Pioneer FC, at our Holtspur home this Sunday the 29th April.

All support your support will be very welcome...c'mon Town!!! 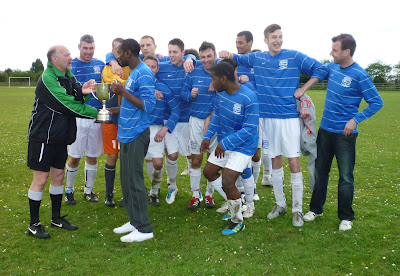 Wycombe  Town  FC  first team finished their league programme with a defining win over  second  placed FC Beconsfield 6-2, with goals from Andy Nicol 3, Delroy  Howell  2 and a Rikki Gilbert goal to win the Premier Division title  unbeaten.  For  'Town' this was a dramatic turnaround from last season when they just avoided relegation. With the Reserves winning Division 2 and with the first team having the Chesham Charity Cup Semi  Final  looming and the Wycombe Challenge Cup Final at Adams Park in  May,  this  is  already  a  fantastic  season long achievement for the club. 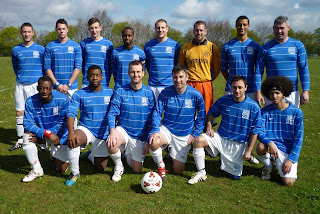 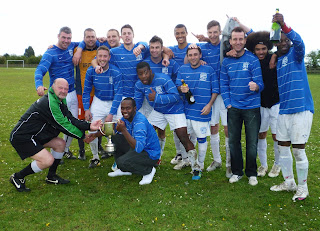 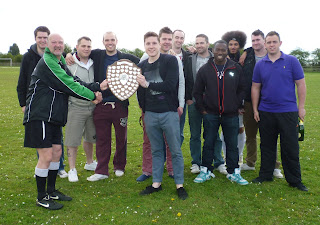 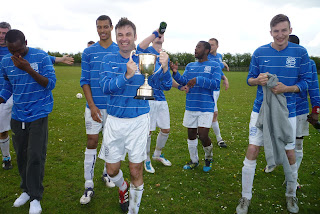 DOUBLE CHAMPIONS...Wycombe Town FC won the Premier League title 2012 by beating FC D&B 6-0 on Wednesday night!!! This comes shortly after the Reserves won the Division two title on Sunday by beating Lacey Green 3-2 with a goal in the last minute of time!!! 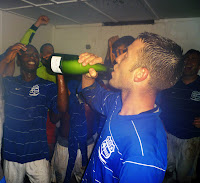 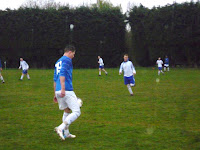 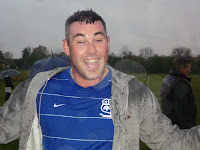 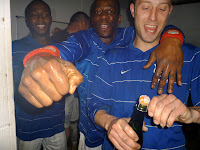 The first team finish the league fixtures on Sunday 23rd April at home to FC Beaconsfield at Holtspur and after the game the League will present both the Second Division and Premier league trophies to the Club.
Posted by WTFC No comments:

Wycombe Town FC 1 v Royal Standard 0In a really tight game between last years Premier Champions Royal Standard and title chasing Wycombe Town, the football was fast and furious and 'Town' ground out the result to win 1-0 with a Delroy Howell goal. 'Town' pressurised Standard most of the match and Standard relied on the counter attacks. Wycombe Town now have four games in two weeks starting this Sunday with a home game against FC D&B at Holtspur. The Reserves last game in their quest to win Division 2, is at our Holtspur home against Lacey Green on the 15th April.

King George V 1 v Wycombe Town 4Away to King George, 'Town' were quick off the mark scored early on and dominated the first half going in at half time deservidly 3-0 up. The second half was somewhat similar but with King George making more of the play, 'Town' absorbing the pressure and making quick counter attacks. George managed to find a way through the tight defence to score but 'Town' hit back again to make the final score 4-1. Delroy Howell scored 2 and Darren Crane and Vinny Cuva got a goal each. 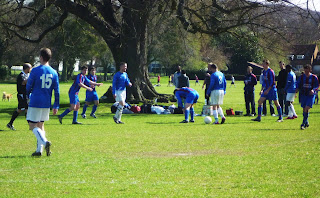