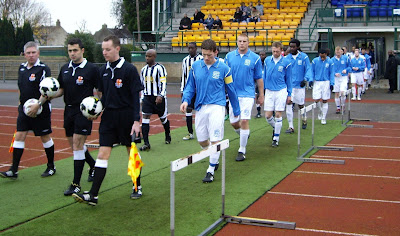 Wycombe Town's FA Sunday Cup adventure continues after they beat Kerria Sports 5-3 in an eight goal thriller at the Crydon Sports Arena on Sunday. Kerria Sports, who reached the last 16 in last years competition and included former Crystal Palace and Wycombe Wanderers Richard Harris in their ranks would provide a stern test for Town who knew they would have to be at their best if they wanted to progress in the competition.

Town started brightly and created one or two openings while Kerria broke dangerously with pace on a couple of occasions and showed what a threat they could be, Nugent blazed over from close range, Odlum in the Kerria goal had his palms stung from a Nicol drive as Town started to get on top and they took the lead midway through the first half, Lee Thompson got a toe end to an Ayres through ball, the onrushing Odlum smothered the attempt but the loose ball ran to Nugent who calmly slotted home into the empty net from the edge of the area. Kerria then hit back almost immediately when a scramble resulted in Ed Chemlal's desperate lunge bringing down striker Danny Tanner in the box, the ref pointed to the spot and Lloyd Marriott stepped up to scored emphatically. The game was now end to end and just before half time when Aaron Couch jinked in from the right wing, beat two, a flick of the outside of the boot and the ball nestled in the far corner off the post to send Town in 2-1 up at the break.

Town started the second half brightly, Lee Thompson found himself one on one within minutes of the restart but his effort was blocked, Town were made to pay when minutes later when Barry Tyson smashed in a rasping drive from the edge of the box to even things up once again. Town weren't rattled and promptly went up the other end and went in front again, they were awarded a penalty when Mitchel Woodward was tripped in the box, with 3 players already having missed 3 penalties this season for Town the responsibility was taken by Chris Ayres who stepped up and hit the ball hard and low but Odlum was equal to it and he tipped the ball around the post, his disappointment must have been immense as from the resulting corner Mitchel Woodwards diving header beat him and the defender on the line. Kerria were not to be outdone though and found themselves on terms again with 20 minutes to go as a towering leap from Lloyd Marriot resulted in the ball looping over a helpless Anthony Cooper in the Town goal.

The game was delicately poised at this stage and you sensed the next goal was crucial, it was Wycombe Town that got it as an Arron Couch cross eluded Kerria's keeper and Andrew Nicol was there at the far post to thump the header home, Kerria then threw everything they had at Town whose backline stayed strong and they managed to make the game safe with 5 minutes to go when a defenders slip let in Aaron Couch who calmly slotted the ball home for his second and Wycombe Town's 5th.
Posted by WTFC