Wycombe Town FC played their forth match of the season taking on FC Beaconsfield who will be one of the favorites to win the Premier this season. In a tight game FC Beaconsfield took the lead against a Wycombe Town team with only two of last years all conquering team available, by half time Town were 2-1 down but well in the game, both teams created good chances but it was FC Beaconsfield who made the pressure count towards the end of the game, coming out 5-2 winners. Towns goals were scored by Mark Nugent and Adam Davies. 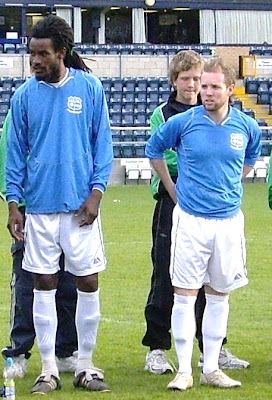 Where have all of last years all-conquering team gone? and why?

Lots of reasons really, in Sunday Football there is no structure to progress so after winning the league and cup double for three years the challenge diminishes and i'ts difficult to maintain the enthusiasm, also the first team manager stepped down and several players decided to concetrate on their Saturday football. We will now begin to build a new first team squad built on last seasons succesfull Reserves team squad who won the first division and Chesham Cup last season.